Key Staffing Company Trends To Look Out For 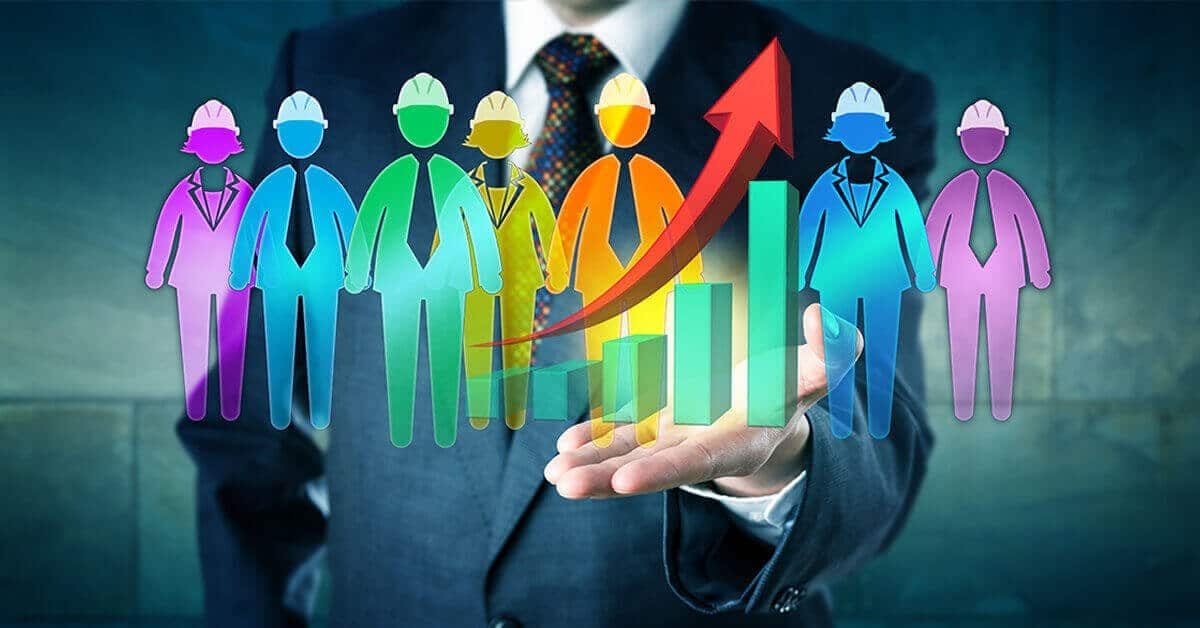 The temporary staffing industry is currently at one of the most dynamic periods in its history. Over the last few years, the staffing industry has been expanding rapidly. According to the Bureau of Labor Statistics (BLS), temporary recruitment hit an all-time high of 2.9 million jobs in mid-2014. And it is still rising.

The Staffing Industry Analysts forecast a 6% growth in 2015, followed by another 5% growth in 2016. Given that, according to American Staffing Association (ASA) statistics, 3 million temps work for US companies each week, the prospects seem bright for staffing companies.

Even then, the temporary staffing industry isn’t without its challenges. A combination of legal changes, higher standards by host companies, and a shortage of top talent means that staying competitive isn’t a breeze.

For a staffing company to thrive in these rapidly changing times, it needs to stay in tune with market trends. Tracking industry trends will enable a company to maximize the opportunities, and successfully navigate challenges coming ahead. As we move into the 4th quarter of 2015, and on to 2016, the following are the key staffing company trends to look out for. 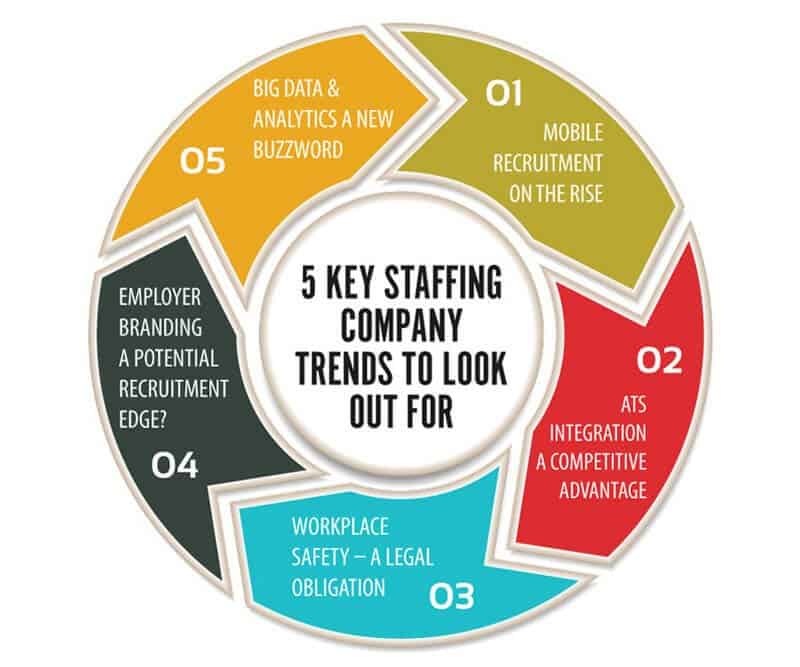 1. Mobile Recruitment On The Rise

As mobile devices like tablets and smartphones become more commonplace, many job seekers are using them to search for opportunities. According to CareerBuilder 2015 statistics, 71% of staffing company candidates have searched for jobs on a mobile site.

At a minimum, staffing companies will have to ensure that their website is accessible via mobile devices. This will enable them to capture talented individuals who seek out for opportunities using their mobile devices. More forward-looking ones will develop apps which can make it easier for candidates to seamlessly submit applications from their mobile devices.

Applicant Tracking Software (ATS) is increasingly becoming an essential part of the recruiting process. One of the key trends predicted for 2015 is employers preferring staffing companies which employ ATS in their hiring process. As ATS becomes more popular, this demand will certainly continue.

However, as more employers discover the benefits of ATS Integration (i.e. integrating their system with that of the staffing company), many will certainly demand for it. ATS integration streamlines the screening process, reduces turnaround time, increases operational efficiency, minimizes manual errors, reduces the likelihood of bad hires, and reduces the overall cost of operations.

On July 15th, 2014, the Occupational Safety and Health Administration (OSHA) released a memo which forever changed the legal landscape for staffing companies. The agency stated that it would consider staffing companies as “joint employers” with the host companies which hire their temps. As such, they will share responsibility for the health and safety of their workers.

Since that time, the OSHA has been cracking the whip on staffing companies whose temps it deemed were working under unhealthy or unsafe conditions. It has offered citations against at least 10 staffing companies, slapping them with fines ranging from $6,000 to $64,350.

A staffing company’s reputation is likely to become their greatest asset, or greatest liability when it comes to recruitment. Glassdoor statistics indicate that up to 69% of US workers would not take a job from a company with a bad reputation, even if they were jobless.

They also state that 90% of employees read reviews from both current and former employees before taking accepting an offer of employment. This means that a company with a bad reputation can easily lose potential hires.

Glassdoor statistics also indicate that 94% of people are more likely to apply for a job if an employer actively manages their brand. “Actively manages” in this context includes responding to reviews, updating their social media profiles, and sharing updates about their company culture and work environment.

Such statistics have turned “employer branding” into a buzzword over the past year. As the temporary staffing industry becomes more competitive, it is something which staffing companies will have to turn to. Early adopters will likely enjoy a recruitment edge over those slow to adapt.

Even then, serious strides have been made especially in its usage in human resource. Sophisticated analytics is also providing a faster way to make sense out of tons of data. According to International Data Corporation Forecast for 2015, companies which use analytics will make decisions 5 times faster than those which don’t.

Such claims are only going to increase in the future. They will also make companies more open to big data. Already, according to IDG Research Services, 85% of people already believe that big data can enable them to make better business decisions.

As staffing companies seek an edge in an increasingly competitive industry, more and more will turn to big data and analytics. This will put pressure on those not using it to join the bandwagon. The fact that HR analytics software is becoming more powerful (and cheaper) will only increase this trend.

In a nutshell, as we move into the last quarter of 2015 and beyond, those are the 5 key staffing company trends to look out for. Paying attention to these trends, and making decisions basing them will position a company to maximize the opportunities, and minimize the risks coming ahead.

The CareerBuilder U.S Job Forecast for Q2 of 2016 contains a number of facts which are critical for understanding the jobs market. The facts which are most relevant for the staffing industry include the following:

These figures are from a CareerBuilder survey of more than 2,000 hiring managers and other HR professionals from a cross-section of US industries. They present the latest insights into the state of the jobs market during the second quarter of 2016.

For any staffing agency to remain competitive during Q2, they need to keep in tune with the prevailing trends. The three main staffing trends for Q2 of 2016 include the following:

1. Compensation As A Competitive Tool

Otherwise, the temp may become discouraged and unmotivated. They may not only be unwilling to work for the staffing agency in future, they can also review it negatively. Given that branding is now a key competitive strategy for staffing agencies, temps sharing negative experiences can hurt an agency’s ability to attract top talent.

Therefore, during Q2 of 2016, staffing agencies need to be prepared to increase compensation. This will make them fully prepared to handle situations in which their temps are working with any of the 69% of employers who plan compensation increases.

In Q2 of 2016, staffing agencies may find themselves running short of talented individuals. This is due to a combination of two factors: the 37 percent of employers who intend to hire temps and the 33 percent who intend to transition temps into permanent staff.

Rehiring is basically offering a temp who has completed one contract another assignment. According to the 2015 CareerBuilder “Opportunities in Staffing” survey, only 25% of staffing agencies rehire temps. This means that three-quarters of temps are hired only once.

In the Q2 of 2016, more staffing agencies will likely be forced to adopt rehiring. This is because a large number of employers will be looking for temps. In order to meet the rising demand, staffing agencies have to rehire the temps whom they had previously contracted.

According to the OSHA, the Zika virus is likely to be the greatest threat to workplace health during the next few months. As such, OSH has teamed up with the CDC to issue guidelines for Zika virus protection.

Any staffing agencies which deploys people to work in Zika at-risk areas will have to focus on Zika safety. This is because the “joint employer” guidelines issued by the DOL makes both staffing agencies and their clients jointly responsible for the health and safety of temporary workers.

The starting point for any staffing agency committed to protecting its workers from Zika is to read the OSHA/CDC Zika Guidance which was released on April 22, 2016. A copy of the guidance can be found here.

The staffing industry is renowned for its dynamism. The industry is in a constant state of flux. So, as we enter into the Q3 of 2016, what trends should the staffing industry watch out for? Well, the commencement of Q3 has coincided with the release of two critical reports. These are the 2016 Emerging Workforce Study (EWS) and the CareerBuilder Midyear 2016 US Job Forecast.

A Wage War Is Brewing Among Employers

In Q2, compensation emerged as a competitive tool. Employers started using ever higher compensation packages in order to outdo each other in the quest for top talent. In Q3, this competition will likely turn into all-out war.

The 2016 EWS predicts a looming “wage war” among employers. In this war, the ammunition is ever costly wage packages. According to the EWS, this war arises from a combination of two factors. First of all, top talent is relatively scarce on the market.

Already, according to the EWS 74% of employers claim that they have offered wages in order to remain competitive. Even then, the CareerBuilder Forecast says that 70% of employers intend to increase wages over Q3.

The implication of the wage war is that staffing agencies will have to bump up their paychecks in order to remain competitive for top talent. Those who don’t could find themselves lagging behind in the race to recruit the best individuals.

For long, the staffing industry has observed the on-demand economy as parallel, and there for a non-threat. As such, many staffing agencies have been happy to focus on their core business of providing temporary workers, and letting the freelancers operate on their own.

Every few months so, some totally unexpected social phenomenon impacts the workplace in ways even the most ardent expert could never have predicted. In Q3, this phenomenon takes the form of Pokémon GO – an augmented reality mobile game recently released by Nintendo.

Normally, a video game is the last thing staffing industry experts would have to worry about. However, Pokémon GO is now more than a video game. It has become a social phenomenon. And it is invading the workplace.

The Pokémon GO phenomenon is something staffing agencies will have to address over Q3 of 2016. If one-third of employees are spending over an hour playing the game, then their productivity levels will certainly be affected. This will not bode well for the staffing agencies which hired them.

Granted, Pokémon GO will not last forever. And in fact, it isn’t entirely negative. The game offers a great way for teams to bond, connect and cultivate camaraderie. Also, it offers health benefits since people have to move around to play it. Therefore, staffing agencies will have to figure out how to harness Pokémon GO’s benefits, while minimizing its potential detrimental impact on productivity.

In summary, over Q3 of 2016, there are three trends which the staffing industry will have to contend with. These are: the emerging wage war as employers offer higher compensations to attract top talent; the rise of on-demand staffing, and the video game Pokémon GO which is threatening to take over the US workplace.