Top 5 HR & Staffing Trends To Look Out For The modern workplace is fluid, dynamic and ever-changing. On the one hand, this is exciting because it presents a number of opportunities. On the other hand, it is potentially disastrous because it throws up lots of challenges. Success as an staffing companies & HR often means maximizing the opportunities while overcoming the challenges. Successfully navigating the changes sometimes requires anticipating them. This is where HR tends come in handy. Paying attention to such trends can enable an HR to strategically position their organization to maximize the opportunities and avoid potential obstacles. The ultimate question is: what is the best way to predict the top HR trends? Well, the simplest way is to ask top HR professionals. This is what the Society for Human Resource Management (SHRM) does every two years. The 2013 Workplace Forecast Survey identified certain HR trends to look out for in the next five years. 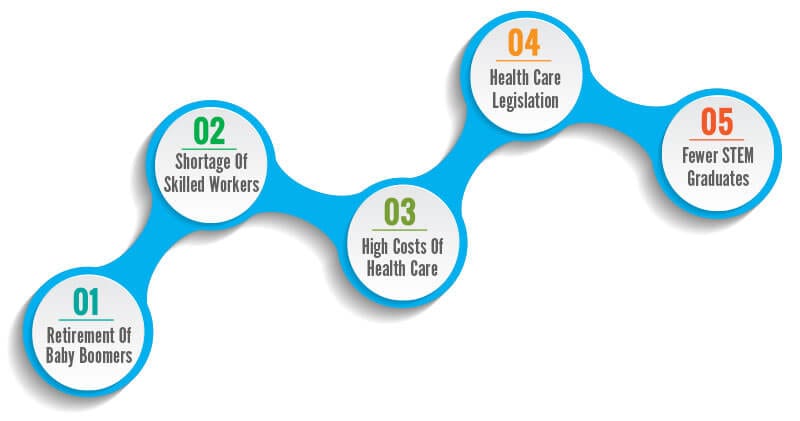 The top HR trends reported were the following:

The mass retirement of Baby Boomers has been cause of consternation over the last few years. In 2010, eyebrows were raised when an analyst predicted that 10,000 baby boomers would retire each day. This projection was based on the fact that 10,000 baby boomers would turn 65 each day from 2011 to 2030. Well, in 2011, the first baby boomers began turning 65. Although there hasn’t been a dramatic exodus of boomers from the workforce, the mass retirement is inevitable. The simple fact is that not everybody retires on the day they turn 65. However, once they cross the threshold, their retirement becomes a matter of when rather than if. HR professionals are certainly concerned about the impending mass retirement of Baby Boomers. In the 2013 SHRM Workplace Forecast, 68% of HR professionals said a large number of baby boomers leaving work at the same time will have a significant impact on the workplace. The mass retirement will mean a loss of many highly skilled individuals with vast amounts of experience – some of who are in top management. HRs will have to not only find capable replacements, but also manage the retirements with dexterity in order to minimize disruptions in the workplace.

In March 2015, the White House stated that there were 500,000 unfilled jobs in the technology center. These jobs were largely unfilled because there was a shortage of people with the adequate skills to fill them. A similar sentiment was raised in a 2014 JP Morgan Chase report. The report which focused on New York City, noted a significant skills gap for middle-skill occupations. These are occupations which require some education or training beyond a college degree. These include occupations in health care, information technology and manufacturing. The reason for this is a growing mismatch between the educational sector and the employment sector. Basically, schools don’t equip people with skills which are relevant to the workplace. According to the Georgetown University’s Center on Education and the Workforce, the skills shortage is set to increase. The center projects a shortage of up to 5 million skilled workers by 2020. These sentiments are certainly shared by HRs. In the 2013 SHRM survey, 73% of HR professionals reported that a shortage of skilled workers will have a major impact on the workforce. 25% thought it would have a minor impact, and only 2% thought that it wouldn’t have any impact. The shortage of skilled workers will most likely drive up labor costs. Employers will have to offer more generous benefits in order to attract and retain skilled employees. They will also have to use innovative recruitment strategies in order to land talented individuals.

According to the US Chamber of Commerce, health care is already the most expensive benefit paid by US employers. With the overall cost of health care projected to rise to 20% of GDP in the next decade, it is unlikely that the costs will reduce soon. In fact, HR professionals consider high costs of health care as the most significant workplace trend. In the 2013 SHRM survey, 79% reported that high health care costs will have a major impact in the workplace over the next five years. Most fear that the impact will most likely be negative. According to the Council for Foreign Relations, American businesses already have the highest health care costs among OECD countries. This is already affecting their competitiveness. Rising costs are therefore unlikely to have a positive impact on employers.

The Affordable Care Act of 2010 (aka Obamacare) is one of the most significant legislations released over the last few years. For employers, this act is projected to radically transform healthcare benefits. Given the concerns about health care costs, the implementation of Obamacare is the most significant political and legislative trend. In the SHRM survey, 79% of HR professionals thought that the implementation of the healthcare legislation will have a major impact on workplaces over the next five years (i.e. 2013 to 2018). Since most provisions of the law came into effect in 2014, there is no doubt that implementation will be a big deal. The actual impact of the implementation is the subject of a fierce debate. Detractors of the law say that it will significantly increase the already high healthcare costs. Proponents of the law point to certain provisions which employers will be able to utilize to actually lower their costs. There is also considerable political uncertainty about the longevity of the law. This is due to the fierce criticism which it has drawn from conservative Republicans. Some political commentators postulate that if a Republican Administration were to take over the White House in 2016, they would repeal the law. Such uncertainty means that HRs will certainly keenly follow the health care legislation over the coming years. However things turn out, the legislation will certainly impact the workplace in one way or another.

According to a 2014 report by JP Morgan Chase, the number of Science, Technology, Engineering and Math (STEM) students graduating from American colleges is reducing. This is already having significant effects in the workplace with thousands of unfilled STEM jobs in New York City alone. The situation isn’t much different in the rest of the country. In fact, the shortage of STEM graduates is likely to be felt more severely over the next few years. This is due to a resurgence of manufacturing and an expansion of the technology sector. When combined with the retirement of Baby Boomers, there is likely to be a serious shortage of STEM talent in the workplace. HR professionals are certainly concerned about this shortage. 68% of those interviewed in the SHRM survey reported that a lack of STEM graduates will have a major impact on the workplace. 28% thought it would have a minor impact and only 4% thought it would have no impact at all. The concern isn’t just limited to HRs. Even the Federal Government is concerned. Over the last few years, the government has been working on immigration reforms which are specifically designed to attract STEM talent from other countries. And in March 2015, the White House announced Obama’s TechHire Initiative – a plan to train people rapidly to fill the vacant STEM jobs. It is unclear whether the government’s initiative will be sufficient to offset the STEM gaps. However it turns out, recruiting STEM talent is something which HRs will have to contend with over the next few years. In a nutshell, those are the top HR trends to look out for over the next few years. These trends will likely affect a number of HR activities including recruitment, promotion, and compensation. Therefore, any HR who desires to stay at the top of their game needs to pay close attention to these trends. Ultimately, the biggest HR risk is getting caught unawares.