Why US Companies Are Taking Longer To Hire The average time required to complete the hiring process has increased by almost 45% over the last five years. This is according to a research report released by Glassdoor in June 2015. The report, entitled “Why Is Hiring Taking Longer?” revealed that the average number of days required to hire a US employee increased from 12.6 to 22.9 between 2009 and 2014. This represents an increase of 44.97%.

Although this increase seems dramatic, it whittles down to when confounded for changes in economic factors. When changes in factors like levels of economic activity, labor demand and unemployment levels care considered, the average time increases by between 3.3 to 3.7 days since 2009.

The increase remains even after controlling for differences in job titles, industries, companies and numerous other factors. A rise of 3.3 to 3.7 days over six years still represents a significant increase in the time required to complete the hiring process. The Glassdoor report advances a number of reasons for this increase.

The most poignant ones are the following:

The recruitment times for different jobs differ depending on job characteristics. The more complex the job characteristics, the longer the time it takes to recruit. For instance, the Glassdoor report reveals that the longest hiring times were for highly skilled positions like patent examiners (87.6 days), assistant professors (58.7 days), senior vice presidents (55.5 days) and program analysts (51.8 days).

On the other hand, the shortest hiring times were for low skill or semi-skilled positions such as dishwashers (6.9 days), bartenders and servers (5.7 days), entry-level sales (5.4 days) and entry-level marketing (3.9 days).

The report attributed the overall increase in hiring times to a general growth in the complexity of job characteristics. This is partly caused by advances in technology over the last half a decade.

In recent times, employers have increased the number of “screens” which applicants have to get through in order to get hired. Such screens include group panel interviews, skills and personality tests, candidate presentations, background checks and drug tests.

According to the Glassdoor report, there has been a significant rise in the number of techniques used in the screening process. The biggest rise has been in the use of background checks which increased from 25% in 2010 to 42% in 2014. The percentages reflect the proportion of employers who use it.

The usage of other screening methods has also increased: skills tests have increased from 16 percent to 23 percent, drug tests from 13 percent to 13 percent, and personality tests from 12 percent to 18 percent. All the reported increases are from the year 2010 to the year 2014. The combined increase in the screening methods no doubt led to an overall rise in the length of time it takes to recruit.

The legal and institutional settings in which recruitment takes place can significantly impact the length of recruitment time. Specifically, laws that make it costly to hire and fire employees ultimately lead to longer recruitment times. This is because recruitment managers have to be extra careful to get this right.

According to the Glassdoor report, US recruiters operate in a more lax legal setting than their European counterparts. As such, countries like Germany, France and the UK – which have tougher worker protection laws – make recruitment more complex. This is why recruitment in the US is 4 to 6 days faster in the said countries.

However, over the last few years, there is one legal change has directly impacted the recruitment process in the US. This is the rise of “Ban the Box” laws which makes asking about an employee’s criminal record at the outset of the interview process illegal. This means that employers have to interview people they would otherwise not have even considered.

The problem has been exacerbated with the increasing crackdown by U.S. Equal Employment Opportunity Commission (EEOC) on employers who violate its pre-employment screening guidelines. This means that employers have to carry out background checks on potential recruits only after extending to them a “conditional offer”.

The combined effect of the Ban the Box laws and the EEOC crackdown means two things for employers. First, they have to interview everybody – even ex convicts. Secondly, they have to background check every recruit to ensure that no ex-con slips through. This has no doubt contributed to the increase in interview times. 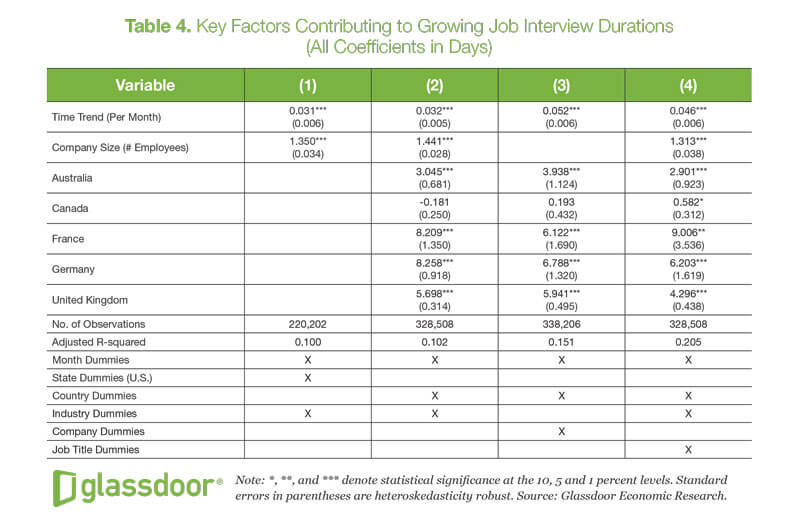 The report did not indicate how company size led to the overall increase in the length of hiring processes. However, given the rate of economic recovery since the recession years, it is safe to assume that some companies will have grown, while traditionally large companies are now operating at full capacity. All this will have led to more hires by larger companies.

In a nutshell, according to the Glassdoor report entitled “Why Is Hiring Taking Longer?”, several factors are responsible for the overall increase in hiring time. These include increased complexity of job characteristics, the use of more screening processes by employers, legal and institutional changes and changes in company size. The report was compiled from 344,250 interviews conducted in six countries between February 2009 and February 2015.